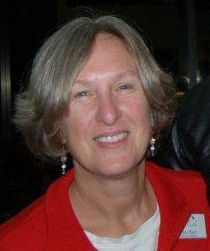 Blake is an Oceanside resident and has lived in North County since 1975: Married for 47 years with two adult children, and two grandchildren. She is a retired educator (2008) who now has the time to explore her personal creativity. She joined the Artist Alliance through the Oceanside Museum of Art in the fall of 2007 and has been trying to establish a reputation for creating unique, one-of-a-kind altered and hand-made books as well as Altar (art) boxes. She has participated in many shows at the Oceanside Art Gallery, Oceanside School of Art, Jazzercise Exhibits, Oceanside Art Walk, and Art in the Alley in Oceanside. She has sold many pieces, and has been praised for her distinctive style. 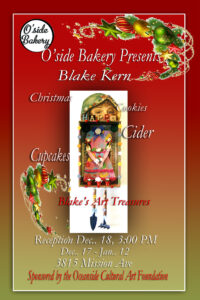 books. Creating altered books and altar boxes is a way for her to focus on a particular theme and develop the layers of texture and 3-D effect that is not obtainable with canvas or paper. She explains her process as follows: “I begin with an idea or sense of where I want to go, and by the end finds myself somewhere unexpected. The piece just takes on a life of its own, and I know when it’s done because it just feels right.” Blake’s goal is for the viewer to have a visceral reaction; to explore the box or book and discover the tiny details and symbolic messages that it contains. Not only does she want to evoke an emotional response, but she wants to tell a story.

M.A. Visual Art and M.A. Education, San Diego State University-Now working full time in her studio. Ms. Osbornpreviously taught art at the Athenaeum Music and Arts Library, the San Diego Art Department, Southwestern Community College and seventeen years at The Bishops School in La Jolla. Her work is included in various collections in the United States, Denmark, Japan and Spain. She is listed in Who’s Who of American Women. Among her many awards, she has received a Visual Artists Assistance Award from the State of California (1977.)