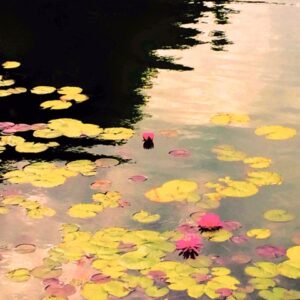 This show has evolved over the past several years.I love experimenting with new ideas and styles, and though my art is based in photography, I consider myself a photographic artist rather than a purist photographer.

The genesis of the bulk of the show, the water lilies, koi, and succulents, grew out of my love of nature. I have long loved the work of the Impressionists — Monet and Renoir are two of my favorites. Georgia O’Keefe’s work has also been an inspiration.

There are also several abstracts here and as much as my soul is stirred by nature, the world that humans have created is filled with all sorts of visual arts that can be very surprising when one’s perspective of mundane objects shifts.

A frozen tide pool became “In the Beginning”; a rusty steel road construction plate a paean to love: “XOXO – Public Display of Affection”; and a macro shot of a rusty pile of marine salvage metal became “Aging Gracefully” — beautiful when capturing the colors in the iron ore. These are just a few pieces from my Mysterious Mundane series.

Thanks to the Oceanside Cultural Arts Foundation and the O’side Bakery for supporting solo artists. We appreciate you! Enjoy the show, and thank you also to all of you who take the time to appreciate and celebrate art and the artists who create it! 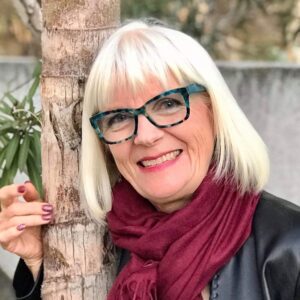 Grace wasborn and raised in Alaska and has spent most of her adult life in the western United States, much of it in California. She lived in Victoria, Canada for a dozen years; spent a year on the east coast, and currently lives and makes her art in Carlsbad, California near the ocean where she bicycles and walks daily.

Grace’s early life and exposure to nature in her home state of Alaska has deeply influenced her work. Growing up in small villages around the state as her government-employed parents moved from station to station with their FAA jobs, developed a deep appreciation for nature that still inspires her, wherever she is.

In those tiny little towns nestled at the bottom of mountain ranges and on the edge of rivers. The cultural impoverishment–no art classes, theater, libraries or museums, no radio, television or newspapers—created a thirst for experiences, culture, and hands on knowledge for things she had only read or dreamed about.

Grace learned about great art and music through books and recordings that her parents had in their home. It wasn’t until her freshman year in high school that she took her first art class, and she was hooked. At twenty she began to realize her life’s dream of traveling the world and seeing the art, cities and cultures she’d hungered for.

Though she has always been a “creative,” she didn’t start her art career in earnest until 2015. Largely self-taught, Grace has emerged into a prolific photographic and mixed-media artist who has a heart for lost, lonely, and forgotten people. 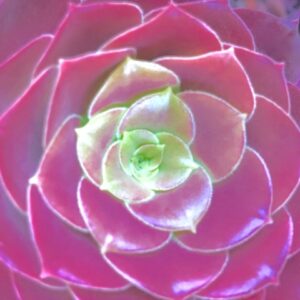 A portion of the sales from this show will benefit Graces’s favorite charity.